The Lady In The Lake 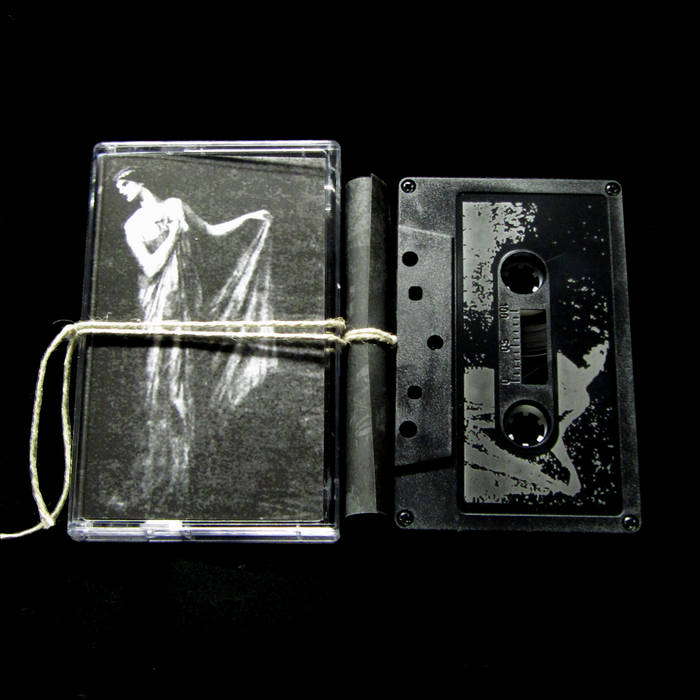 brantly A spacious, transfixing and, challenging experimental black metal EP that summons up Stygian visions of Darkspace, the windswept isolation of Aelter, the ambient coiling of Swans, the murmuring ominousness of Svarte Greiner, and the reflective tribalism of Celestiial. A uniquely memorable black metal 'song'...I only wish a vinyl version existed!

Nic Brown To these ears, "The Lady In The Lake" is the black metal equivalent of Andy Stott's "Passed Me By" and "We Stay Together" EPs; music that was created, then filtered through a sewage recycling plant before being committed to wax. If you've heard either of those EPs, you'll know why you should stop reading and buy this. Favorite track: The Lady In The Lake.

Black Metal & Brews Flowing, gorgeous, and suffocating black metal that came out of nowhere. Easily one of 2014's strongest tapes and a must-have for those eager to lose themselves in atmosphere.

We're All Going To Die

"Nemorensis is about as obscure an entity as it gets these days; the band isn’t on Metal Archives and their Bandcamp page offers no biographical information whatsoever, with only a “USA” tag betraying their country of origin. As far as I can tell, said page is their only internet presence, making them truly inscrutable in an era where every band no matter how big or small seems to be waging full-on Facebook/Twitter/Instagram/etc war in order to gain listeners. Their music is an equally enigmatic brew of baleful ambience and lo-fi black metal, making The Lady in the Lake, their debut for up-and-coming cassette label Sol y Nieve that much more intriguing.
Comprised of a single twenty-seven minute track, The Lady in the Lake is an exercise in minimalism, and yet it is also stunningly dynamic. The song begins with quietly droning synths which slowly begin to congeal into an eerie melody, while voices that resemble the anguished moaning of restless spirits fade in and out of the mix. It’s easy to close your eyes and imagine the titular Lady rising out of the blackness of some long forgotten lagoon to haunt its abandoned moonlit shores.
The guitars enter the mix around the seven-minute-and-thirty-second mark, their creeping distortion a cloak of unearthly despair to enshroud the Lady as she makes her way around the desolate embankments that surround her watery grave. Eventually, a tremolo riff takes shape, accompanied by echoing, raw-throated screams, the Lady overcome with the heartache of centuries, followed by a hypnotic pattern of string bends and swirling synths embodying her defiance. But this quickly subsides, replaced by subtle keys and the sounds of gently flowing water. An almost tribal-sounding drum beat comes to the fore, along with acoustic guitars and clean-chanted vocals, signaling a return to serenity.
The distorted guitars and screams re-enter at around the twenty-two minute mark, the Lady making one last stand against the coming daybreak before being forced to return to her aquatic entombment. At last, all that remains is the rippling black water from which she came, vanished without a trace until the next sunset frees her from her sodden bonds at the bottom of the lake.
As much as I crave knowledge when it comes to the music I love, there’s a part of me that hopes we never find out who’s truly behind The Lady in the Lake. Although the music would still be utterly fascinating, I can’t help but feel as if something would be lost if we were ever to see the man behind the curtain. Nemorensis, whoever they may be, have created a black metal album shrouded in true mystery and wonder, something I wasn’t sure was still possible." - That's How Kids Die

"Through black metal’s divergent history, few styles have remained true to the obscurity of their roots while managing to add something new to a conservative genre. Often new advances (for good or ill) are pushed by extreme divergence (i.e. Alcest, Deafheaven) that can seem at odds with the roots of the music. Still, some of the most mysterious of black metal’s figures have remained in the shadows through these past few decades, artists such as Switzerland’s Paysage d’Hiver, who eschew the spotlight of personality and instead chooses to release low runs of tapes and other artefacts. This style is most often unyieldingly low-fidelity, both in sound and presentation. Yet, many besides the originators have failed to push this kind of black metal in new and interesting directions and instead rely on attempts to recreate the sound of their idols.
Here enters Nemorensis: a mysterious entity from North America, offering a dark atmospheric journey on The Lady in the Lake. This release presents an unexpectedly original take on this old style. The tape is a single track, stretching 27 mintues and 27 seconds. It shifts through several stages along the way; the journey is a fluid one. The tape begins with a drone, which builds to explode into dizzying fuzz and pounding blastbeats. Cavernous shrieks deliver the vocals and a swelling oscillation is added to the guitar which gives the sections a hazy, psychedelic feeling.
However, the harshness of the proceeding music is broken by a beauty that slowly unfolds over the second half of the song. The distorted guitars give way to synthesizers and a swirling voice, which builds new ambiance while a hand drum provides a subtle anchor. What follows is something rare to hear in such low-fi music: beautiful build-up and release, it starts with the addition of an acoustic guitar and chanted spoken vocals, which return to the earlier shrieks as the music builds in a sort of meeting point between Godspeed You! Black Emperor and Burzum.
The lyrics speak of the archetypal heroic journey and the extinction of the old self into a new, awakened form. The music mirrors this journey. The foreboding beginning and chaotic middle sections mirror the breakdown of ego, while the end builds a new foundation that rises towards the sublime. The focus is not external. It is a gaze into the murky depths of the self.
Where many modern bands try to intentionally mimic the basement sounds and themes of their favorite obscure artist, few succeed in actually recreating that atmosphere in any meaningful way. Though echoes of others can be heard, Nemorensis is not imitating Wintherr’s winter landscapes, and that is the major success of The Lady in the Lake. The tape has a mysterious and transcendent feeling that is all its own." - Heathen Harvest

"One of two of the most recent metal releases on the excellent US based metal/noise/folk label Sol Y Nieve. Described by the label as grey metal, The Lady In The Lake is a highly atmospheric affair containing one massive track that flows smoothly through several distinct phases. The slow build up is almost post-rockish in nature, but when it arrives it definitely remains harsh enough to keep one foot firmly entrenched in the realm of atmospheric black metal. Although shrouded in mystery (no metal archives?) I can't stress enough that this is one of my favorite releases of the year so far, and I'm surprised Nemorensis hasn't received more attention." - Cloth Bodies

"Clocking in at 27:27, this is a monolithic beast that works in movements more than functioning like a song rooted in rock structure. The opening section has a slowed down, ethereal gloom that features a melody that strongly reminds me of Depeche Mode's "Policy of Truth" at about 20% of its normal speed. It's haunting and beautiful, but feels somewhat like drowning or falling into an unplanned, drugged sleep. The ominous nature of this otherworldly drone begins to peak as chants and voices emerge, as if carried across great distances by an unexpected wind. As soon as I'm almost entirely lulled into calmness, I'm startled by the dissolution of peace as electric guitars are introduced. Dissonance begins to take hold, yet the guitars begin as merely an extension of the droning ambiance, slowly growing into something entirely of independent. Like an ancient evil awakening from slumber, it rises slowly into view, growing more dreadful by the minute, dripping with grime and reeking of death. With a transition so slow it's almost unnoticeable, the music shifts from droning guitars to a more aggressive, decidedly black metal approach, with a jagged pulsing approach that all but buries the distant percussion. By the end, the song builds to a radiant, glistening passage that feels like a rawer cousin of Lustre. In case my words don't make it obvious, this is already one of the most exciting things I expect to hear this year." - Black Metal and Brews

"If you just so happen to be into raw, droney, atmospheric black metal, The Lady In The Lake by Nemorensis might be right up your alley. This one track album is nearing half an hour of gritty, noisey, chilling black metal. It’s relentless, mean, cold, harsh, and mystical. My favorite part about the work is the transitions that Nemorensis takes the listener through. The track takes off as a drone piece, that weaves itself into endless gloom and doom black metal riffing with echoing screams. But the songs landing is one that is very folkish and ritualistic sounding in nature. It makes me think a lot about the birthing and dying of man. I have noticed that it is becoming more difficult for me to use words to accurately express the sensation that music like that of The Lady In The Lake evokes. The track is very meditative in a way that is both hallowing and chaotic (if that makes any sense at all). It is really a prime example of music intrinsically being able to describe existence, or human experience, in a way that is more powerful, and more full, than that of human language–which in many cases falls terribly short. You will not regret taking thirty minutes out of your day to full digest the vastness of this work, that I can assure you." - Cvlt Nation

"We’ll begin with Nemorensis’ incredible 27:27-minute opus “The Lady in the Lake,” a single track that makes its way over all kinds of musical terrains, leaving your mind floating in the ether when it’s all over. It’s spacey, has quieter moments that reflect in nature, sometimes feels like a seance calling upon spirits long gone, and despite its challenging presentation (hey, some people have an issue with single-track albums, as silly as that seems), really keeps your attention and keeps you wondering what’s next. And it always delivers.
The track begins with a cosmic atmosphere and chilling keys that eventually dissolve into a section that sounds a lot like bizarre chants. Guitars begin to charge up and inject electricity into the track, while a sense of murkiness remains thick and present through most of the song. Shrieks are buried millions of layers beneath the chaos, giving off a sense of being lost so far off in the wilderness, your voice barely can be heard, and just as the song seems to be building into a boil over, it levels off, letting some serenity into the room. Waters begin to trickle, as it feels like the scene has shifted into the middle of a frosty forest, and amid drone, folk flourishes, and smoky keyboard, the song shifts into strong, emotional melodies. Screams once again call out, seeking its inspiration, and the final minutes are awash in both beauty and savagery. I’ve had many journeys with this album so far, and each time something different takes hold, be that the serenity or the fury. There’s plenty to examine here, and you’ll want to put aside some time, get a comfortable chair, and devote all of your brain waves to “The Lady in the Lake.”" - Meat, Mead, and Metal